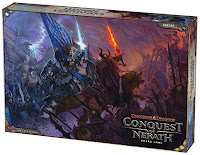 I got a chance to play through of Conquest Of Nerath yesterday and jumped at the chance. I had heard a lot of good things about this game and seen it at the Koffeeklub a couple of times but never played. Given that the game looks like a fantasy version of Risk with wizards and dragons it had the old gamer inside of me jumping up and down for joy and I knew I needed to give this one a go.


The game was developed by Hasbo under their Wizards of the Coast imprint, who are most famous for their Magic the Gathering and Dungeons and Dragons lines. Dungeon and Dragons: Conquest Of Nerath is one of a number of new boardgames designed to support the D&D line and these games have been scoring well on boardgamegeek and have had critical success from games reviewers and critics. This divergance of the D&D line is a welcome development as previously WOTC have produced a seemingly never-ending stream of fluff hardbacks for the roleplaying game, which while no doubt necessary to keep the revenue coming in, had the effect of flooding the 3rd and 4th editions of the game with more content than the players could reasonably purchase and IMHO bringing about the premature end of those editions. Now it seems that WOTC are looking to smooth out the release cycle by releasing non-roleplaying products in support of the line which will keep the share-holders happy and the customers too.

The game is a joy out of the box with an excellent map and superb components. Little points like the starting units are clearly marked on the regions of the map board making setup time quick and easy. The map is designed to minimise the slow and steady build up of forces that many similar games demand and instead players are pushed into each others faces from the very first turn. See the central island on the map in the image below to see what I mean. Swords are drawn from the get go!

The game is deceptively like Risk on initial set-up. There are locations on the board which represent dungeons that can be delved by certain games pieces specifically the Fighters and the Wizards. The rewards for defeating the monsters found in the dungeon lairs are many and varied and it is in many cases these treasures are what make the game special. In my game AndyC who was playing the Undead Legion gained a treasure early on that granted his heroes the ability to fly meaning that the majority of his armies could circumvent my defenses and strike at my undefended regions behind the lines.

In this way the game is deceptive and replayable. No two games will play the same way twice and TimS who kindly hosted the game reports that in the numerous plays of this game that all factions have won the game and there does not appear to be a overwhelming advantage for any one faction. The game was certainly fun if not as heavy as the boardgames I have been playing lately. This is not a criticism as Dungeon and Dragons: Conquest Of Nerath is a fabulous way to waste an afternoon and an excellent way to ease new players into the D&D world

Posted with Blogsy
Posted by Unknown at 10:39